Some time ago in this blog we published an article on the history of shaving and the straight razor; today we would like to continue where we left off talking about the safety razor, that is a T razor with interchangeable blades.

This type of razor was conceived by King Camp Gillette, an American inventor and entrepreneur who in 1895 had the idea of ​​producing a device that was economical, did not require sharpening and strop and had the right size to shave the face of an adult man. In fact, it seems that Gillette hated the freehand razor, considering it dangerous, as well as a waste of time.

Having worked as a young man for a manufacturer of disposable packaging, he had the opportunity to reflect on the advantages of interchangeable products and thought of producing cheap and replaceable blades to attach to a simple handle.

In 1901 Gillette founded the American Safety Razor Company, later renamed the Gillette Company, and patented his razor. If in the first year, 1903, sales were disappointing (just 51 razors and 168 blades), in just over a decade they reached 450,000 razors and 70 million blades per year, also thanks to the massive advertising campaign to make the new product known; with the First World War then, the company was commissioned about 3.5 million razors and 32 million razor blades for American soldiers. The success was such that the company opened branches in Canada and Europe and the effigy of Gillette’s face began to appear on all packages. 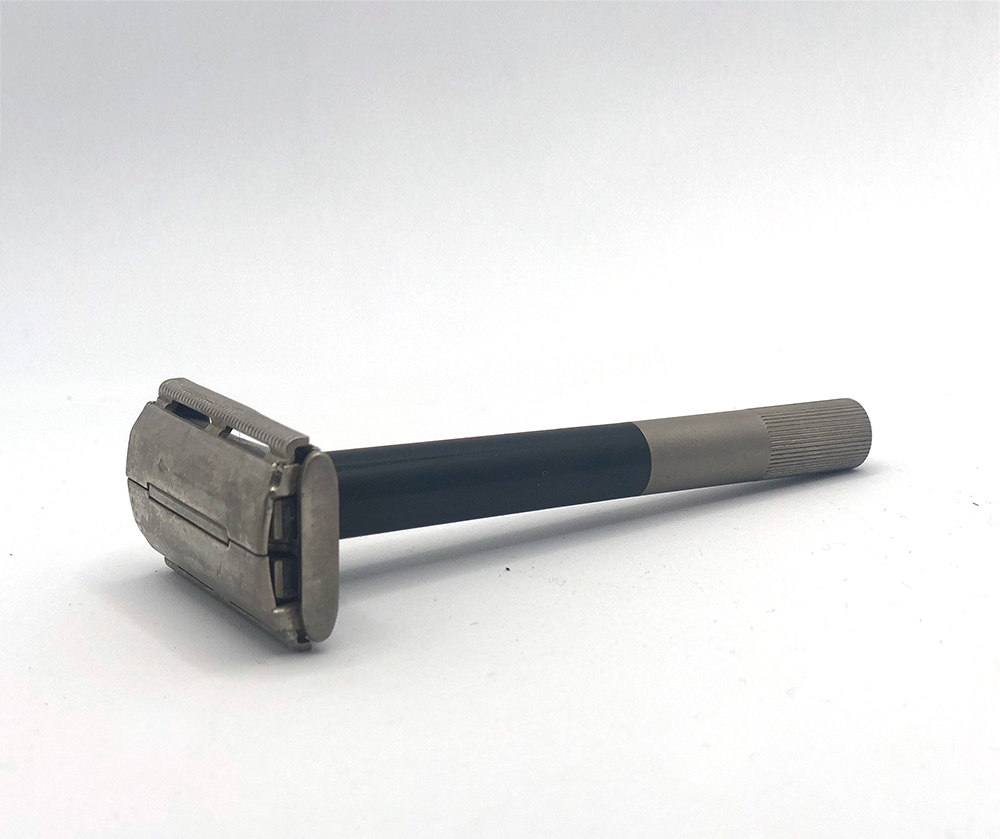 The T razors that are found on the market today are distinguished mainly on the basis of the materials in which they are made (from plastic to metals for those of higher quality), for the type of design and for the type of headpiece.

The main designs are:

TTO (Twist To Open) or Butterfly – turning a pin at the end of the handle opens the head halfway (like the wings of a butterfly) and allows to change the blade;

two-pieces – the cutting head unscrews from the rest of the razor in order to change the blade;

three-pieces – the upper part of the razors unscrews from the handle and it’s divided into 2 pieces (the head and the guard, where the blade lies upon); this type of razor is the easiest to clean, but changing the blade may initially be more difficult.

With respect to the type of headpiece we distinguish:

the closed comb – there’s a protection bar that stretches the skin facilitating the sliding of the blade and reducing the risk of cuts and irritation. This is therefore suitable for beginners, those with sensitive skin and those who shave frequently;

the open comb – instead of the bar we find a sort of toothed comb that allows the blade to apply greater pressure. This makes the razor very aggressive, suitable for those with experience, a very hard beard and who don’t shave too often;

adjustable razors – the allow to adjust how much the blade protrudes thanks to a pin placed at the end of the handle, thus varying the degree of aggressiveness of the razor. This model is also more suitable for expert hands.

The safety razor  has progressively replaced the straight one for reasons of hygiene, safety and practicality: it is a good compromise between shaving efficiency and comfort and the blade protruding only slightly from the head, while coming into close contact with the skin and cutting the hair at the level of the bulb, cannot sink into the skin and cause deep cuts.

We hope Mr. Gillette won’t mind, but in our shop where we have been performing the traditional Italian shaving for over a century, we definitely prefer the use of the good old straight razor, albeit with an interchangeable blade.