Long beard has for some time now become a great protagonist of man’s face. After years of clean-shaven and perfectly smooth faces, recently we have witnessed a real revival of mustache and beards, among those who are satisfied with a “5 pm” look and those who prefer to sculpt their features with an artful cut. Yet in the last two years there has been an even more ancestral phenomenon, that of very long beard, up to more than ten centimeters.

At first glance, one might think that those who have decided to let their beard grow relentlessly do not need the intervention of the barber. However, this is not the case: even for longer beards with a seemingly uncultivated look, the skill of Antica Barbieria Colla professionals can make the difference. Here are some tips.

Long beard: what the barber can do for you

More and more men are marrying an extra-long beard, certainly not out of carelessness. It is in fact an original look, not yet extremely widespread, and able to catalyze the attention of the beholder not only on the beard itself, but also and above all on the eyes.

However, to think that you can throw the razor away and let nature and genetics do the rest is wrong. Even the thickest of beards always requires the intervention of the barber.

The first need is to give shape to the beard, with a finish that can enhance the face, rather than hide it. For most men, the beard does not grow all over the face at the same rate: there are faster areas, such as the chin, and others that are slower, such as the cheeks. Without any retouching, you risk showing messy locks of various lengths. And more than a fascinating aspect, the idea of ​​an excessively run-down look is thus conveyed.

The barber can adjust the length with well-aimed strokes of scissors, giving a shape that respects the oval of one’s face and, at the same time, that facilitates daily care. 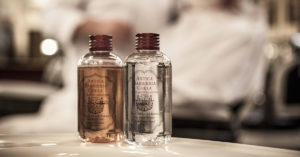 One of the most common problems with a long beard is often its dry, rough appearance, which is just as frequently annoying. This is because not all men are used to arm themselves with a brush and comb and, above all, to treat the beard with the appropriate products.

First of all, a long beard should be washed frequently, using special detergents, such as the Darkwood Beard Shampoo. Furthermore, it is necessary to apply specific products, thanks to the expert hands of the barber who, with a skillful treatment, will allow the emollient substances to penetrate deep into hairs. Among the many solutions, the Bitter Orange Beard Dry Oil certainly cannot be missing, thanks to its moisturizing and restructuring properties.

Thinning out the upper lip

Finally, a frequent mistake of those who wear long beards is to forget to take care of the upper lip, or the mustache area. Messy and excessive growth can become extremely annoying in this area, both visually and practically.

When you try alone at home, perhaps armed with scissors, however, you risk ruining your look, made up of months of patience and dedication. A wrong setting with the trimmer, an excessive stroke of scissors, and mustache disappear. Instead, relying on Antica Barbieria Colla means having the certainty that the cut is perfect, adjusted and with a natural appearance, without any fear of ruining one’s charm.