Still, two days ago I was asked yet again the same question: “How is it like to be a woman leading a male-dominated reality, where both customers and the staff you work with are mainly made by men?”.

There and then I babbled something very polite: “It has its pros and cons, but what matters in the end is doing things with passion”.

Yet it’s two days that I keep thinking about it and here, if you like, I’ll try to explain which is to me the only real answer to this question.

I think my greatest blessing in life was being born from two liberal parents, who in the past years had to face personal situations which nowadays are taken for granted, but back then looked somehow “innovative”.

I am the daughter of a separated man and an unmarried woman who met in 1972.

By that time this woman was 38 years old, and although she was employed, independent and with a decent career, she was blamed daily because she hadn’t married yet.

The man in question instead had to face judgements caused by the end of a marriage (even if the spouses had acknowledged their love was over), since divorce was legalized in Italy only one and a half year earlier.

My mum is a persevering, serious and determined woman, whose father, like mine, was kind and attentive; since she was little he explained to her she didn’t have to settle for what she got, but had to get the most from life both in terms of personal satisfaction and loved ones.

My dad is from humble origin and suffered from having an overbearing father; seeing his mother’s pain growing day after day, he understood that misogynous attitude was wrong and cruel.

Due to this pairing, since I was born I was conveyed the values of freedom, independence, equality and a staple: to achieve my own freedom, people before me had to deal with prejudices and fight to go on and create a fairer world with their daily actions. 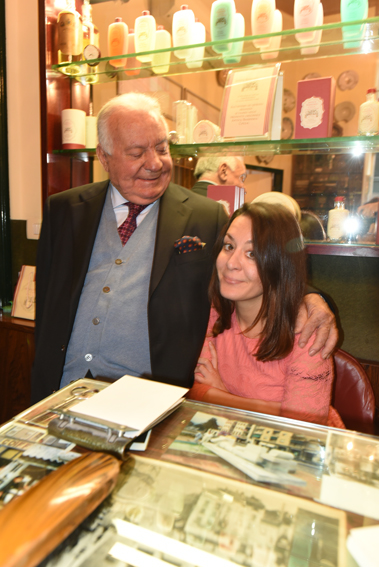 So, many things happened over these years of work among men.

Sometimes I had the pleasure to meet kind and attentive men, aware that we were speaking at the same level and with the same skills, or maybe that I could have more, but there were also arrogant, pretentious, aggressive and unforgettable men like the one who told me: “Look, you should smile more when behind the counter, because a smiling woman is always pleasant” (try to refer this sentence to a man and you surely agree with me it sounds like a joke).

There were embarrassing moments when you can only think about one thing: “How can I put that rocket scientist in his place politely making him understand he is dumb?”

Women are smart, determined, quick and capable of handling so many things at the same time, and the most decisive thing about them is that, according to me, they are already beyond what is now happening, because in their history they have always had to look at consequences, since understanding quickly what’s next is fundamental to best manage what is going on in the present.

They say men and women belong to two different planets and diversity is stimulating and useful to grow, but even if the planets are far away, they need to have something in common: equal rights for their people.

There’s nothing better for a woman to talk to men that consider you as a peer, pay attention on you as a person and are willing to understand your point of view.When this happens, when we are on a level playing field, we go on, and for this to be case there must be no gender inequality.

I do believe that education plays a fundamental role in every child’s life, and this doesn’t mean brainwashing, but action, because children learn from our acts and behaviors. Society is going on, among all the misfortunes this year a woman was elected vice president of the United States.

We have to be patient and persevere, luckily the world is already beyond any backward prejudice women have had to face so far.

A day will come when the question: “How is it like to be a woman leading a male-dominated reality?” won’t be asked because it will be obvious that a woman could lead men, as it is nowadays the opposite.