The custom of shaving goes back thousands of years: it seems that already in prehistoric times the first men removed the hair of the beard one by one with their hands, and then moved on to using small shells as tweezers and sharp stones or bone fragments as razors.

It was probably the ancient Egyptians who introduced the real razor, a bronze or copper blade with a very sharp curved shape, which could only be handled by experts.

A further step forward came with the Romans who, as some finds that have come down to us show, made razors in iron, obsidian and flint.

Over the following centuries, these tools underwent minor improvements, but we have to wait until the end of the 17th century to witness the birth of the straight razor, also known as a barber’s or folding razor, since the blade folds inside the handle.

The first razors of this type were made in Sheffield, England. Here, around the middle of the 18th century, Benjamin Huntsman devised a procedure that allowed to obtain a particularly hard type of steel (later known as Sheffield steel), suitable for the manufacture of sharp blades which were later mounted on decorated handles; his method was also quickly adopted by the French and Germans and the latter became renowned manufacturers of straight razors, so much so that they began to talk about Solingen razors to indicate those produced in the homonymous area located in North Rhine-Westphalia.

The main parts of the straight razor are:

handles or scales: the two main parts that make up the handle to protect the blade once the razor is closed, made of various materials including wood, horn, ivory, ivory, tortoise shell and mother-of-pearl;

pivot: the pin on which the narrow end of the balde rotates;

tang: the upward curved metal end of the narrow part of the blade beyond the pivot which acts as a lever to help raise the blade from the handle. One or two fingers resting on the tang also help stabilize the blade while shaving;

shank: the narrow support piece between the tang and the main blade which sometimes features decorations and the brand stamp. The top side and the under side of the shank can sometimes exhibit indentations for a more secure grip;

shoulder: the curved lower part of the main blade from the shank to the cutting edge;

heel: the point where the shoulder joins the cutting edge;

toe: the endpoint of the cutting edge at the front of the blade, opposite to the heel;

stabilizer: a thick strip of metal running transversely at the junction where the main blade attaches to the shank. It cab be double, single single, or can be absent in some razor models;

back or spine: the arched, non-cutting top of the blade;

cutting edge: the cutting part of the blade opposite the back;

point or head or nose:  the other free end of the blade, at the opposite end of the tang on the spine. 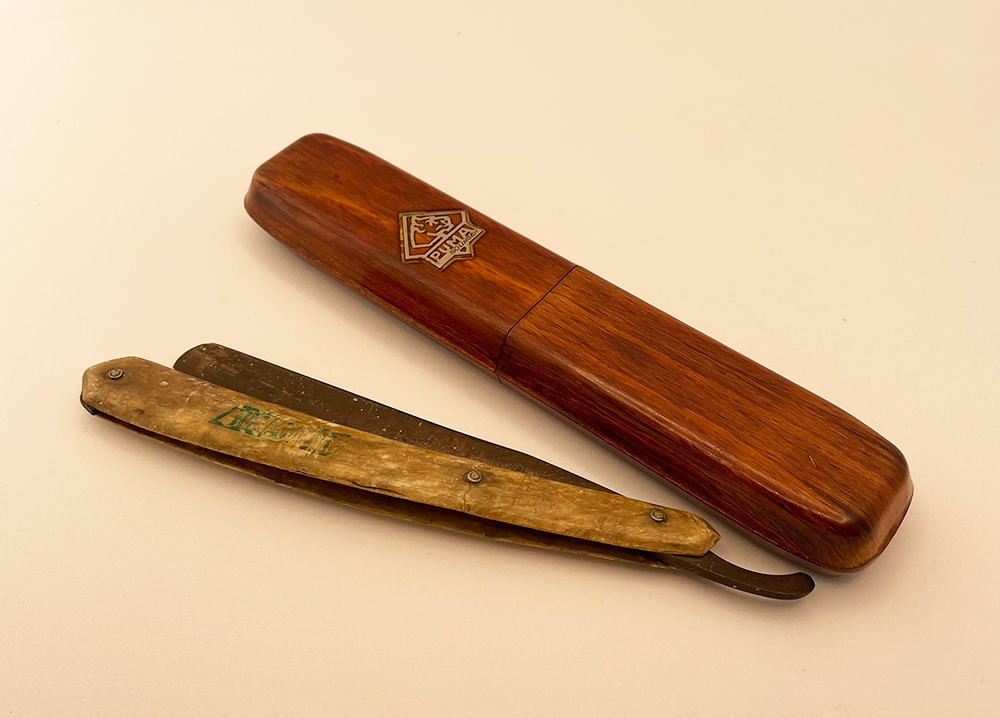 Straight razors were widely used throughout the 19th century and in many countries until the mid-20th century; however, as they require more attention during shaving and careful maintenance (periodic sharpening on stone and use of strop to keep the blade clean and sharp), they have progressively been replaced by other types of razors.

However, there are still today a certain number of enthusiasts and both artisanal and industrial producers in Europe (especially in Germany), North America and Asia (particularly in Japan).