In our shop, the ancient craft of shaving has been handed down since 1904; faithful to the Italian tradition, our barbers have always used the classic shaving soap and, since 1945, its cream version, whose recipe is still the original one. But let’s see their features in more detail.

Both are specific products aimed at preparing the face skin for shaving, moisturizing and protecting it from the aggressive action of the razor; they also allow to soften the hair and facilitate the sliding of the blade.

The Soap has a solid consistency and is packaged in a greaseproof paper; its formulation is based on Almond Oil, an ingredient with a strong moisturizing and softening power, particularly appreciated by those with sensitive skin, and with a delicate fragrance.

During production, the soap still liquid is poured into the appropriate molds and then left to solidify for a time that varies according to the humidity in the air and the time of year. 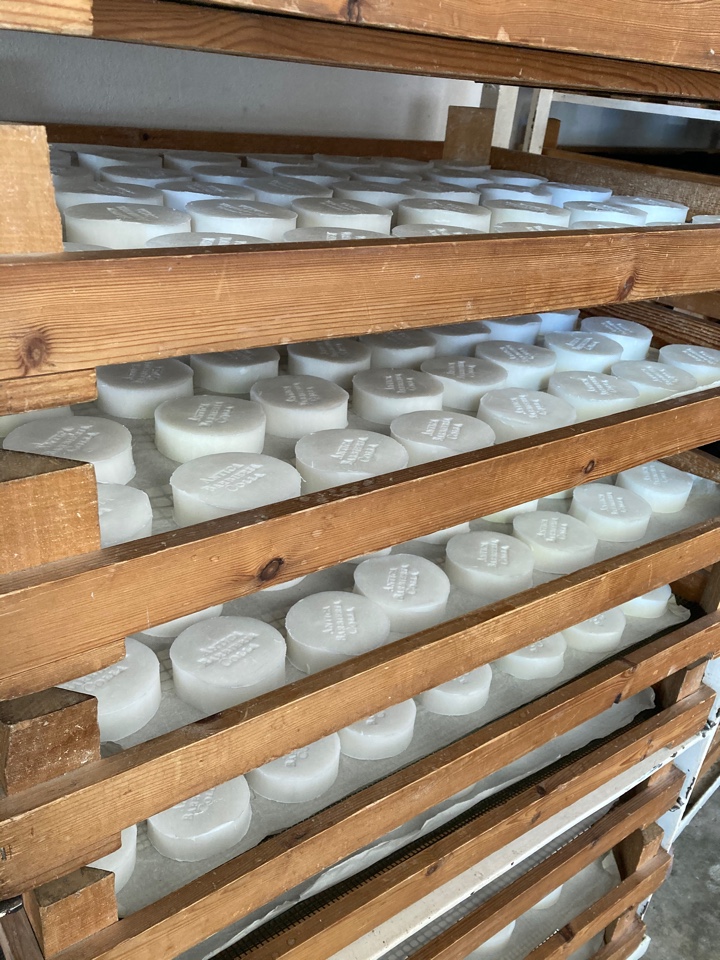 Shaving soaps solidifying in our laboratories

To be used, the soap has to be lathered, an operation that may not be easy if you are not familiar with it, especially if the water used is very hard.

To lather the soap, you need to prepare the brush first: fill a bowl with hot water and leave the brush to soak for a few minutes, in order to soften the bristles.

After this time, take the brush and squeeze it to remove excess water: the bristles have to be moist, but not dripping.

Then you can proceed by rubbing the brush on the soap with circular movements until you start getting some foam. At this stage we recommend paying attention to the quantity: a little soap is enough to produce the foam necessary for a complete shave.

Now it’s time for the so-called saponata (which means lathering): with the brush you apply the foam on the face and perform a series of continuous circular movements so that the foam rises further until it becomes a white, thick and creamy lather.

Once this is done you can start shaving.

Let’s now talk about our Shaving Cream: it has a soft consistency and is packaged in a jar; the formulation is the same as the soap, therefore based on Almond Oil.

Its production takes place by emulsifying the ingredients to form a cream, which is then transferred to the jar in a still semi-liquid form. The jar is then closed and the product is allowed to cool and solidify for a short time before handling the package again.

The Shaving Soap in Cream has to be lathered too, but given its consistency the operation is simpler and more immediate: you can in fact take the necessary amount of product and put it in a shaving bowl, and then lather the foam with a damp brush. .

After applying the product on the face, with repeated circular movements we will obtain a compact and homogeneous lather.

Have a good shave!