The mustache brush has been an indispensable accessory for male care for centuries. And today, thanks also to the latest trends that have brought back the mustache, it is increasingly sought after by admirers. But what is this historic tool for and, above all, how is it used?

Having a brush available is essential to always show a tidy and well-managed mustache, especially in this month of November. In fact, in these days, Movember is celebrated, the month dedicated to male health, represented by the custom of growing long and showy mustache for four weeks. And on the occasion of this anniversary, Antica Barbieria Colla launched its special promotion a few days ago: by purchasing two products from the beard line by November 5, the Extra-Firm Mustache Wax is free.

Mustache brush: history and use

The mustache brush is a tool whose origins date back to ancient times, so much so that finds from ancient Greek and Roman civilizations have come down to the present day. And it is even thought that the invention of this instrument is even antecedent, considered that the custom of wearing long beards and equally showy mustaches was very common for several centuries before the birth of Christ. 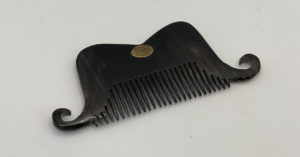 This accessory has found a new life recently, with the mustache and beard making a big comeback in recent years. And so the most varied representatives have returned to the market, but not everyone knows the actual uses of this tool. What is it for?

[Mantovanini] had therefore been working for a few days in Colla’s shop when the Master Puccini entered: he was the only free worker. Colla, with his gentle manner, approached the Master and said to him: “Take a seat” and called Mantovanini who at the time must have looked like a child, if until he was sixty he kept the diminutive appearance of an ageless man, and he explained the cut he had to make. Guido felt paralyzed, and he could do nothing but pretend to cut the Master’s hair. After a week Puccini returned. The old boss came to meet him and Puccini asked him: “Isn’t that boy from the other time around?” Guido, as he heard Puccini asking for him, ran into the back and hid, thinking that the Master would complain about the previous cut; but Puccini, smiling, added: “Because, you see …, he didn’t do anything to my hair, but that’s okay with me”. I still keep Giacomo Puccini’s toothbrush with which he used to comb his mustache in the shop.

What types of mustache brushes to try?

Today on the market there are two main types of mustache brushes, even if there is no lack of more curious alternatives: 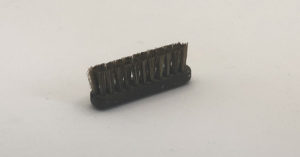 Regularly combing the mustache not only guarantees its shape, but also ensures its shine and promotes the well-being of the skin, eliminating all excess sebum residues.